To get your bike back up and running again, you need an appropriate replacement battery. This article gives the best battery for Harley Davidson list to keep your bike in tip-top shape!

Why Specific Battery for Harley?

Harley Davidson motorcycles are big-engine, heavy-duty bikes that require some very specific replacement parts. Harley Davidson bikes can be extremely powerful and use a lot of power while running. Therefore, the batteries need to follow suit. They require very strong battery cells to mimic the huge engine parts of the bike.

Although not all Harley motorcycles are equipped with 12-volt batteries, most models do have this voltage requirement, so it is important when you purchase your next replacement battery for your Harley that you get one with this same voltage level. You must obtain a specific type of battery for your bike to ensure its safety and get the most out of it. 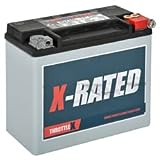 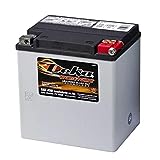 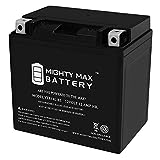 When choosing the best battery for Harley Davidson, you have to think of the battery type as well. AGM batteries are the most popular choice for Powersports applications, both motorcycles and ATVs. They’re sealed units that can sit unused for months or years without losing charge, they resist vibration, they deliver steady voltage under heavy current loads, they charge quickly, and they start reliably even in very cold conditions.

AGM batteries are maintenance-free but don’t have any liquid acid to spill even if you roll it over. That means replacing them is easier because there’s no need for special tools or training to replace one yourself.

AGM batteries are not cheap, but they are far less expensive than lithium or gel when you consider their advantages.

Here are several brands that make some of the best batteries for Harley Davidson motorcycles:

The Duralast line of automobile batteries has become popular due to its long-lasting performance and quality design. They make several motorcycle batteries perfect for Harley Davidson motorcycles.

Yuasa is one of the top choices for Harley owners as well. Besides producing batteries for numerous brands of motorbikes, Yuasa is well-engaged in manufacturing quality batteries for Harley too. Their batteries are a good combination of quality, price and durability.

PowerSource is one of the few brands that are primarily dedicated to producing Harley batteries. You’ll even find different batteries for different models of Harley from PowerSource, while most other manufacturers make batteries for a series in general.

Known for producing batteries of all types, Exide is one of the best brands to consider when looking for a replacement Harley Davidson motorcycle battery.

According to experts, their RedTop line of motorcycle batteries is one of the best brands available today. It is an option for Harley motorcycles due to its performance and durability.

This company manufactures high-quality automotive products for motorcycles, including their VHX Systems.

When selecting a battery tender for your Harley Davidson motorcycle, one crucial thing to keep in mind. The two most common types of connectors found on motorcycles are clamps and eyelets. Make sure the battery charger you select works with either type of connector.

Several different sizes are available for these motorcycles, ranging from 2 inches to 3 ¼ inches in length. To find the exact battery dimensions on your bike, you should measure your battery’s length, width, and height. If you have a 2-inch by 2-inch by three ¼ inches twelve-volt battery.

You would likely need a battery tender that has been designed to work with small batteries because this size is smaller than most other motorcycle batteries. Batteries made for motorcycles range between 2 ½ to 3 ½ inches in length and often include eyelets or clamps.

The premium quality ranges between $ 200 to $500. This is because it can go 500 charge cycles, and it fits perfectly under your seat.

As for standard units, these batteries provide required cold-cranking amps or CCA, and they range between $ 100 to $200.

While affordable but reliable ones range from under $100 and are the most common of them all, this type is best suited if you take your motorcycle out only occasionally.

The required Cold Cranking Amps or CCA in a Harley battery is very important when choosing a new battery. The CCA is the quantifiable amount of current a battery can deliver at 0° F for 30 seconds and not drop below 7.2 volts. This measurement will be illustrated in amps or CA on batteries, but it doesn’t mean much to the average consumer without any other context.

Required Voltage and AMPS in a Battery for Harley

The standard voltage for Harley Davidson motorcycles ranges between 6 volts and 12 volts but may vary depending on the model year or other factors. If you’re not sure what kind of voltage your bike needs, check out the owner’s manual.

Harley Davidson motorcycles tend to require at least an 80 amps per hour rating as a general rule of thumb. It may vary depending on the model year.

Higher cranking amps are better. It’s more important than voltage when choosing a battery for starting your Harley Davidson motorcycle. Most batteries used on motorcycles are designed to deliver high-current bursts of power.

The higher this number is for your new Harley Davidson motorcycle battery, the more likely it will start your bike on cold winter mornings or at high speeds on hot summer days.

Harley Davidson motorcycles have a charging system that is designed for a specific set of tasks. The battery, alternator, voltage regulator, and rectifier are parts of the charging system found on all Harley Motorcycles.

Finding the right battery for your Harley is difficult, considering all of the different things Harley Davidson motorcycles need. Each battery has its strengths and weaknesses.

When shopping for a replacement battery, stick with an exact match or higher grade than the original part. It ensures that the battery fits properly and has enough power to keep up with your motorcycle’s demands.

How Long Do Harley Batteries Last?

You should replace the batteries every 2-5 years according to your local service station. Most Harley Davidson motorcycles are equipped with a maintenance-free battery that does not require checking or filling electrolytes, automatically replaced by the sealed system. This makes it easier for owners because they never have to worry about taking care of their batteries.

When to Replace the Battery in Your Harley?

Harley Davidson motorcycles are designed to start with a minimum of 12 V / 931 CCA batteries. However, in most cases, you will need a little more power. You need to replace the battery if it does not have enough energy to start your motorcycle several times a day. It means that the battery should have at least 12 V / 1050 CCA. If you prefer to use your motorcycle regularly, the best option is to get a battery that provides at least 12 V / 1200 CCA.

Harley Davidson lead-acid batteries last for several years without being used. The only thing that users need to do is to buy a high-quality battery with deep cycle abilities. This means that over time your voltage will decrease slowly but surely. However, this does not mean that your battery will die quickly or stop working altogether. It means it will take longer to charge again as time goes by fully.

To get your Harley Davidson back up and running again, you need an appropriate replacement battery. When looking for the best battery for Harley Davidson available on the market, the first step is determining what kind of fitment you require for your motorcycle. It is essential to pick a perfect brand as well as a model. Finally, it is crucial to look at the price and warranty the battery offers to know whether or not it can keep up with your demands.

Make sure to check our other guides & reviews for Harley riders: